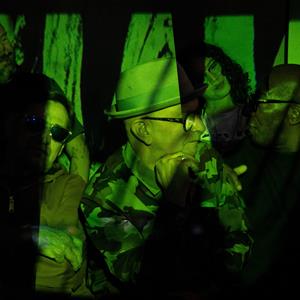 All A Certain Ratio performances

16+ only. 16s to 17s must be accompanied by an adult. No refunds will be given for incorrectly booked tickets.

A Certain Ratio’s greatest strength has always been their unpredictability. “That’s what people like about us, they don’t know what’s coming next!” proclaims vocalist Jez Kerr. Since they emerged from the hallowed grounds of the late 70s punk scene, they’ve moved with gleeful disregard for the boundaries of style and genre, their eye fixed firmly on constant progression. It’s an ethos that’s open-minded over all else, and that’s seen them take everything from experimental electronica to vintage funk, filtered through their own Mancunian lens.

Even by the band’s own standards, however, their latest studio album 1982 is multidimensional. It shoots off in every direction, whether via searing Afrobeat, mind-melting jazz breakdowns or moody electronic experiments. “Our only criteria when writing is ‘is it any good? Does it sound interesting?’” says Jez. “Maybe if we put more thought into it, we’d have had some hits, but that’s not really why we’re doing it!” It’s dizzying, a thrill just to try and keep up with. “The greatest thing about this band is that its eclectic,” affirms the band’s formidable percussionist Donald Johnson. “Everything we listen to is so diverse, we’re always finding new music and going down wormholes and those things really stimulate us.”

“We’ve been asked a couple of times to do gigs where we play our old albums in full. We always say ‘yes, that’s a brilliant idea, but we’re too busy doing new music, so come back and ask us in ten years,’” says guitarist Martin Moscrop. In fact, he’s underselling the sheer pace at which the band have been operating in recent years. 1982 was recorded straight off the back of the band’s three acclaimed 2021 EPs, which were themselves recorded straight off the back of 2020’s acclaimed album, ACR LOCO, their first new recording for Mute. They write and record on the fly, purposely limiting their time in the studio so they can move on from each element before it has a chance to grow stale.

It is rare for any band to be firing on so many creative cylinders at once, let alone a band five decades into their career, but then again, A Certain Ratio are a band unlike their contemporaries, particularly in Manchester. “It gets me down when people here hold on to the past, The Hacienda, Oasis, The Stone Roses. Move on! Why go and see the Hacienda on Ice when you can do new stuff?” Martin declares. In part the band see 1982as an opportunity to broaden out those tired old stereotypes of what ‘Manchester Music’ can be. There’s the slick and charismatic presence of Mancunian rapper Chunky on ‘Waiting on a Train’ for example, who trades bars with the beguiling vocals of one of the city’s fastest-rising neo-soul musicians Ellen Beth Abdi.

Ellen appears again throughout the record on both lead and backing vocals (as well as occasional flute). Though a newcomer to A Certain Ratio, it says a lot about the band’s progressive instincts that she’s already as central to the process as the members who’ve been there since the 1970s. “Ellen’s a whirlwind! She doesn’t conform to norms, she does things her own way,” says Donald. Occasionally she reminds the band of Denise Johnson, their longstanding vocal collaborator until her untimely passing in 2020, “a similar strength of character,” as Jez puts it, but it’s important to note that they see her as a successor, not a replacement. “Replacing Denise is something that’s never going to happen,” Donald continues. “We’ve got 20 years of recordings with her, and we might still find some more, but we wanted this to be a new dimension. Denise always used to say ‘live in the moment, live for now. Celebrate the people and the things you’ve got before they’ve gone.’”

It’s not that the group don’t look back as well as forwards. The record’s closer ‘Ballad of ACR’, which takes its name from a triptych of autobiographical paintings by Jez, condenses the band’s story into a sparse and emotive song (via a psychedelic 1950s swing-jazz breakdown in the middle, naturally), that contains a direct tribute to Denise (“Her hugs never-ending, her beautiful smile”). Working on an expanded and anthologised reissues series of their older work directly before their barrage of new releases for Mute has made the band well aware of their past – and for Jez provided a chance to “nick a few riffs” – but the way they honour that legacy is to keep adding to it. “We want to record as much music as we can before we leave this planet,” says Martin.

On the glistening old-school funk of ‘Holy Smoke’ the band pay tribute to the genre’s forefathers, from James Brown to Chaka Khan to Prince. On ‘SAMO’, named for the graffiti tag of Jean-Michel Basquiat, Jez namechecks a string of figures from New York’s 1980s art scene – an environment which has held massive sway over the band since their time recording there in the 1980s (it’s mentioned on ‘Ballad of ACR’, too). On both ‘Ballad of ACR’ and ‘A Trip in Hulme’, they hark back to the Mancunian district that birthed them. “Back in the day it was a little bit the same as New York, like John Waters’ ‘Desperate Living’, everyone was taking drugs, everyone was a bit out of it, everyone had a dream and wanted to have fun,” Jez recalls. Again, however, what’s most telling is that the record never slips into straight-up revivalism. “We still love the old school stuff, but we use it as a creative source for the now,” says Donald.

For instance, the album’s title might conjure memories of the band’s imperial early phase on Factory Records, the year that saw them put out both the acclaimed Sextet and the cult favourite I’d Like To See You Again, but it’s more of a playful red herring than an invitation to nostalgia. Like all the band’s best ideas it emerged spontaneously in the studio when Martin was ad-libbing into a vocoder over what would eventually become the track’s instrumental. “It’s called ‘1982’ but I wouldn’t say this album sounds anything like ‘Sextet’,” he points out. Adds Donald: “The title is just playful. People can take it whichever way they can.”

The band’s playful streak goes beyond just the title. Jez says he likes nothing more than when a friend hears ‘Waiting on a Train’, the track featuring Manchester rapper Chunky, and can’t even tell it’s A Certain Ratio performing it. “The idea was to make it different from anything else on the album,” he says. Adds Martin: “You could play it to someone in ten years’ time and ask them what year it was from, and they wouldn’t have a clue.” The track began life as a lo-fi hip hop jam in the studio, and it made perfect sense to bring in both Chunky and Ellen – already good friends outside of A Certain Ratio. “It worked really well, there’s great chemistry between them,” Martin continues. “It’s got the right amount of pop, the right amount of surrealism, the right amount of moodiness. It just works.”

Ellen’s presence is also crucial to ‘Afro Dizzy’, a searing afrobeat-inspired track. She has experience with the genre, so she was invited to pen her own lyrics around a whirling instrumental based on a sample pack of drums recorded by the late Nigerian master percussionist Tony Allen. It was written just days after Allen died in 2020. They’d long been speculating on whether the drummer, one of the band’s heroes, might one day drum with them, and so after his passing found a way to make it happen.

Allen’s collaboration with techno pioneer Jeff Mills Tomorrow Comes The Harvest, also inspired ‘Tier 3’, whereas the breezy jazz experiments of ‘Tombo in M3’ draw from the work of Brazilian drumming great Airto Moreira, “one of our all-time heroes,” as Martin calls him. However, ACR’s influences go beyond just music on 1982. On the record’s Basquiat-referencing opener ‘SAMO’, Jez draws on a lockdown spent devouring as many documentaries on visual art as he possibly could “I saw Basquiat and thought ‘Oh my God, how fantastic is this?’ I do count him with Picasso or someone like that, it’s got the same uniqueness about it. Most of the lyrics on that song are SAMO quotes but slightly changed.” The track’s slick and punchy funk grooves are an adequate match for the kaleidoscopic brilliance of their source material. “I want people to be in a record shop when SAMO’s playing, walk up to the counter and say, ‘What’s this?’” Martin says.

Looking backwards and forwards all at once, drawing on influences from across every spectrum, 1982 is a record that will reward a dedicated listener dozens of times over. The band themselves, however, are already looking to the future once more; they are halfway through the next record, and have even begun plotting the record after that. And, as Jez explains right at the beginning, “You never know what’s coming next.”

Waiting on a Train
1982
A
Trip in Hulme
Constant Curve