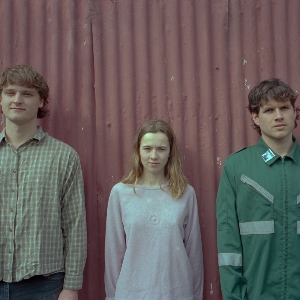 Wharf Chambers is a members' club and you need to be a member, or guest of a member, in order to attend. To join, please visit our website. Membership costs £2 and requires a minimum of 48 hours to take effect.

CLAMM could not have come from anywhere other than Melbourne, Australia. Theirs is a city that bleeds music. Iconic bands such as Eddy Current Suppression Ring and Total Control have built on the city's history of open-hearted, fist-in-throat, fiercely independent music. Scenes centring around labels like Antifade, Flightless and Cool Death have held the torch for countless groups as good as any in the world.

However, CLAMM arrived completely apart from any established scene or sound. They began playing shows in 2019, sharing bills with virtually anyone who would have them. Jack Summers (vocals/guitar) and Miles Harding (drums) had been friends and musical collaborators since early childhood. Under various banners, they performed for years with friends and siblings across Melbourne’s underground landscape. It wasn’t until they found Maisie Everett (vocals/bass) that the CLAMM picture was complete. Their quick ascension drew support from KEXP, Triple J, Triple J Unearthed, Double J, and Triple R as well as shared bills with the aforementioned Eddy Current Suppression Ring and Amyl and the Sniffers last year.

Debut album Beseech Me was recorded with Nao Anzai (Rolling Blackouts, Floodlights, NO ZU) and mixed and mastered by Total Control’s Mikey Young.

Its ten tracks explore the margins of fury and tenderness. ‘Keystone Pols’ churns like the bowels of a factory, with an alarming guitar riff that sirens repeatedly. Title track ‘Beseech Me’ is a reaction to the strain of a single file lifestyle. In the demonic 6/8 chug ‘Repress’, Jack begins a snarled plea: “I don’t want your fucking money! I don’t want your fucking time! I don’t want your holiday payout I just want to be outside.” About ‘Liar’, Jack says “it’s about dealing with a voice in your head that isn’t always telling the truth.”

Pointing sharpened question marks at power and oppression, CLAMM’s explicit lyrics and indignation is aimed at those who press dents into a struggling world. Despite their frustration, CLAMM also maintain a shining optimism in their ethos. Their tumultuous rhythms and fuzzed mechanical guitar are fierce counterpoint to messages of anti-violence and self-betterment.