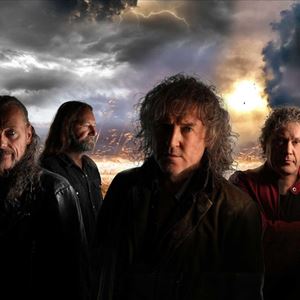 DARE is best known for their frontman singer songwriter Darren Wharton who first rose to fame in the early eighties playing keyboards with legendary Irish rock band Thin Lizzy. From the tender age of 17, Darren went on to record the famous Chinatown album with Philip Lynott, Scott Gorham, Snowy White (Pink Floyd) and Brian Downey. After being featured on Chinatown, Phil Lynott had taken Darren under his wing and the young musician from Manchester soon found himself touring extensively throughout Europe, America, Japan, Australia, and New Zealand.

After a year of selling out concert halls around the globe Thin Lizzy once again returned to the studio. Now as an established member of the band, Darren was about to embark on his second Thin Lizzy album Renegade. After co-writing Angel of Death with Philip Lynott, Wharton’s talent for song writing began to emerge. Several world tours later, Darren went on to co-write The Sun Goes Down, This Is The One, Heart Attack and Someday She’s Gonna Hit Back on the legendary Thin Lizzy album Thunder and Lightning.

After four great years of playing alongside Phil Lynott, Scott Gorham, Brian Downey and Whitesnake’s John Sykes, the Thin Lizzy disbanded. Darren returned to Manchester where he began to write, sing, and produce his own songs. After recruiting young guitarist, Vinny Burns, it wasn’t long before Darren’s new band DARE were getting noticed by the major labels in London and in 1987 Darren and DARE were signed by A&M records.

Back in Los Angeles, DARE’S second album Blood from Stone was produced by renowned L.A. producer Keith Olsen (Whitesnake, The Scorpions’ and had a much harder edge than the previous Out Of The Silence. When PolyGram bought A&M records in the UK, several changes forced Darren and Dare to walk away from their four-year deal.

Disillusioned and frustrated, Darren decided to move away from Manchester to North Wales. Settling in the Snowdonia National Park, Darren quickly set about building his own recording studio. Now working with new guitarist and friend Richard Dews, Darren was inspired by the haunting natural beauty of his new surroundings, and a new atmospheric Celtic feel started to emerge in the DARE sound. The first songs to come out of Wales were to become DARE’S third studio album Calm Before The Storm, it would also see Darren's in a new role - as producer. Calm Before The Storm was well received by Dare fans marked the welcome return of DARE, re-establishing the band throughout Europe and the UK. Dare were back!

Taking time out from writing, in 1994 ten years after the sad death of Phillip Lynott, Thin Lizzy’s Scott Gorham, John Sykes, Darren Wharton, Brian Downey and Marco Mendoza reformed for a very successful tribute tour of America, Japan and Europe to honour their friend Phil Lynott. On January 4th they performed in Dublin, at the Point and were joined on stage with many Irish legends including U2’s Bono, Bob Geldof, Joe Elliot, and Van Morrison.

Back in Wales, Darren composed new material for a new album Belief. This beautiful album set a new standard for DARE. “Like a mirror to the soul” and a doorway to the heart of this unique songwriter, the first single White Horses was playlisted by Terry Wogan on BBC Radio 2. Tours throughout Europe and Scandinavia followed, including a 12-date tour with Asia in the UK.

After the success of Belief, DARE fans were rewarded again when Beneath The Shining Water was released in the summer of 2004. This album, hailed by many as a modern classic, is highly original and instantly addictive. It featured some of Darren’s most inspired songs to date. Sea Of Roses received months of airplay on BBC Radio 2. DARE had once again pushed back their musical boundaries, broadening the bands appeal to both young and old alike.

Behind the scenes, 2008 finally saw the official US release of Belief and Beneath The Shining Water as a double CD though Warner Music/ADA, widening DARE’S audience even further.

Now the world stage was set, DARE’S latest album Arc Of The Dawn was released October 2009 on Wharton's own label, Legend Records, through Warner’s distributor ADA, and to the fans delight, saw the return of old friend and guitar legend Vinny Burns; back with Dare again on live shows, including a famous appearance at Sweden Rock Festival alongside Whitesnake and Def Leppard.

2012 was an exciting year for DARE and their fans. With Vinny Burns now firmly back in the band, along with drummer Kev Whitehead and Nigel Clutterbuck on bass, there were many new projects planned. Including a special edition re-release of Calm Before The Storm 2, completely re-recorded with never-before-released bonus tracks.

Charting once again in Sweden, DARE also reached new heights in America, hitting number #5 in the U.S. Amazon Rock charts, and an amazing number #1 in the Japanese Imports charts. Following critically acclaimed live performances in the UK, London Roundhouse, Germany Rock Of Ages, Sweden Rock Festival, Spain, Athens, Norway, the band’s reputation grew from strength to strength, reinstating Dare’s cult status in Europe and the UK and the world. With the first single On My Own playlisted on Planet Rock for over three months, the band found themselves back on top of the AOR rock scene.

2022 will see the April release of DARE’s tenth studio album Road To Eden featuring the single Born In A Storm. The band will support the release of the album be embarking on a 12-date UK tour in October 2022.