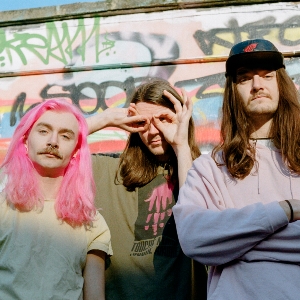 Please note the booking fee for this event includes a Levy of £0.30 which is charged by the venue

After a whirlwind 2019, Brighton based Gender Roles return in October 2021 with their ‘Rock Refresher’ UK tour. 2019 saw the band release their debut album PRANG through Big Scary Monsters Recordings, chaotic sell-out headline shows across the UK & Europefollowed and the year ended triumphantly with a live Maida Vale Session for Annie Mac on BBC Radio 1. Since then, the band have been working tirelessly in the studio on the follow-up album to PRANG. With album 2 safely in the bag, the band look forward toboth debuting new material live in October -as well as playing those fan-favourites once again!

Gender Roles released debut album, PRANG, on 30thAugust 2019 through Big Scary Monsters Recordings. The album was recorded and produced by Ian Sadler at Emeline Studios, Kent, over 10 days in the beginning of 2019. The album builds on the hook-laden yet heavy signature sound laid out on previous releases and focuses it across 10 cohesive tracks taking issues from all areas of life and putting them in a positive frame. Just a month after the release of PRANG, the band embarked on a sell-out UK tour, already sparking mass singalongs to album tracks such as ‘You Look Like Death’, ‘Hey With Two Whys’ and fan-favourite ‘Bubble’.

“While it’s the immediatecatchiness of their grunge-flavoured alt-punk that hits you first, closer inspection reveals jittery math-rock riffs, the occasional heroic guitar solo and hints of the quirkily expansive attitudes to songwriting often found in the works of Biffy Clyro or Steven Battelle. PRANG is a party you won’t want to leave early and Gender Roles are only just getting started.” Kerrang! Magazine Aug 2019