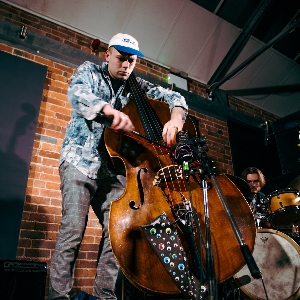 Fergus Quill's Imaginary Big Band (aka Ferg's Imaginary Big Band) are a 22+ piece semi-fictional noise machine who are part of the burgeoning left-field independent Leeds based record label, Tight Lines. Initially inspired by the cosmic jazz legend and musician/band leader Sun Ra, Ferg's Imaginary Big Band is a semi-fictional large ensemble whose primary aim is to bring big band music kicking and screaming into the 22nd century. The IBB play rowdy and always huge sounding arrangements of an incredibly diverse selection of tunes from composers including Duke Ellington, Sun Ra, The Rajasthan Express, Art Ensemble Of Chicago alongside a growing pad of original music composed by Fergus and other members of the group. Fergus Quill and his band are on a mission to make Britain weird again.

With such a bold and noble quest ahead, Commander Quill has assembled one of the most elite musical task forces our city has ever seen. Consisting of members from Têtes de Pois, Skwid Ink, Necktr, The Mabgate Organ Trio, The Fergus Quill Trio, JASMINE, TC & The Groove Family, Mamilah, Joe By The Book, Belgrave House Band, Project Hilts, Awen Ensemble, MDVLNS, Durdy Laundry, The Golden Age of TV, Long Legged Creatures and DIXON Music, amongst many others, it's literally a who's who of the vibrant Leeds DIY jazz/experimental/electronic music scenes. Obviously with such a huge line-up of incredible musicians, getting the ensemble together for live shows is a major challenge on it's own and thus to date, they've maybe played a dozen gigs in the last 3 years. If you were lucky to catch them at one of these, it's less a standard gig and more like a huge sound and vision experience. A place where fantastic musicianship and soloing meet theatrical drama with a huge dollop of humour to boot. This will probably be their only gig of this autumn and it's also their first live show since December 2019 so they'll be playing TWO sets instead of the standard one. If you can, try and catch Ferg's Imaginary Big Band live at least once in your lifetime. The experience might not be life changing but it's guaranteed to bring a smile to your face, a spring in your step and leave you with good memories for a long time after the show has passed.