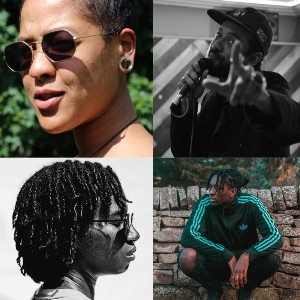 ***a table seated show - limited capacity - sit where you like***

Space Dolphin are the brainchild of Leeds multi-instrumentalist/producer Jake Mehew who also runs MindSpace Recording Studios and is boss at MindSpace Records. He cut his musical teeth a decade ago in the Nottingham hip-hop and drum & bass scenes before moving to Leeds several years ago to do an MA at Leeds College Of Music. Once in Leeds, he immersed himself in the local hip-hop and jazz scenes forming Space Dolphin and gigging across the city and beyond including supporting jazz/soul legend Roy Ayers and an appearance at the debut We Out Here Festival in 2019.

Jake began recording the band alongside a host of guest musicians, singers and MCs and a debut double single "Smoking Kills/Wet Paint'' snuck out just before the first lockdown in spring 2020. Gigs may have stopped temporarily but Jake continued to mix the album, now titled "More Than Soul", and alongside the live band it featured guest MCs/singers/musicians from Leeds, Nottingham and Manchester including Frankie Bones, Jermaine Peterson, Phenecia, DJ NikNak, Ty Healy, Motormouf and Harleighblu. It was finally released in June 2021 with two singles preceding it and all got a great response from across the UK and beyond with plays on Jazz FM, Totally Wired Radio, 1BTN, Shoreditch Radio, Noods Radio, Shizzle FM (Australia) and Jammonite Radio (Serbia). In July 2021, Space Dolphin were invited by We Out Here Festival to perform on a virtual broadcast celebrating bands/music from the Leeds jazz/soul/global beats scene.

Now finally, Jake and Space Dolphin will play the album out live for the first time. Also, this will be their first live show in over a year and a half so Jake has pulled together a great line up which includes himself on keys/synth bass/samples, Kareem Hunter (guitar), DJ NikNak (turntables), Joel Steadman (flute/congas/percussion) plus guest MCs from the album Motormouf and Phenecia. More guests tbc.

Support act is August Charles, a young soul singer from South Yorkshire born in Ndola, Zambia and raised in Doncaster. August first started singing at the age of 12 as a member of the school choir at his high school taking a musical interest in jazz, soul, indie and r'n'b as a child of the naughties.

In 2019, August was scouted by the respected Higher Rhythm Talent Development Program. Working alongside renowned studio engineer Paul Littlewood and multi-award-winning producer Andy Seward, August benefited from high-quality recording and mentoring facilities. In May 2020, August released his debut single "Take Me Away", a dreamy fusion of jazz and soul co-written with Israeli jazz pianist Tal Babitzky.

August's last single, "Something New'', was added to the BBC Introducing Hot List as one of fresh new artists to watch out for. BBC Introducing Sheffield added it to their Top 50 Tracks of the year. As we move through summer, August is finalising the release of his debut EP (supported by Help Musicians UK's Do It Differently Fund). In July 2021, August is due to make his live festival debut on the Library Stage at the huge Tramlines 2021 event.

The Central Sauce website said about him "August Charles channels the delivery and range of Marvin Gaye with the soul and unique energy of Sampha.” Tom Salmon from BBC 6 Music said “His voice just knocked me for six and he is definitely a new favourite act for me”.

Tonight, he makes his Leeds debut at RE:SOUL Sessions with a top class band made up of some familiar names and faces. They are Tom Woodhouse (guitar), Dave Edwards (electric bass), Sam Dolling (keys) and Richard Moulton (drums).

A great night of past, present and future soul music with big chunks of hip-hop and jazz thrown into the mix from two emerging northern artists making waves here in the UK and beyond.