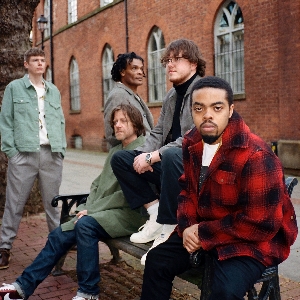 Pay on entry (subject to availability)

After a great sold out socially distanced show at Brudenell Social Club in June 2021, promoted by DJ Lubi/RE:SOUL Sessions, Manchester soul/jazz-funk sensations Secret Night Gang are back again at the venue tonight but this time, we can all dance! After a brace of killer singles over summer 2021 for Gilles Peterson's Brownswood Recordings, plus a jaw dropping live set at his We Out Here Festival in August, they return to the venue to promote their debut album. Jazz/funk/soul sparks will fly for sure.

Founding members of Secret Night Gang are Mancunians Callum Connell (sax/keys) and Kemani Anderson (lead vocals). They've shared a love of writing music together since they were 14 year old school friends. Hooking up with original bass player Stuart Whitehead (bass) in 2018, the trio spent that summer writing an album inspired by soul, funk, r'n'b, gospel, jazz and everything in between. Manchester drum hero Myke Wilson (52nd Street, Swing Out Sister, Corinne Bailey Rae) joined the band after they knocked him out at a jam session he was running in Manchester.  And thus began the musical journey that leads to here.

Self-releasing their debut single "Wanna Be With You" in April 2020, produced by top Manchester engineer/producer Yvonne “D’Alchemiss” Ellis, another Mancunian music legend whose credits include Simply Red, Swing Out Sister, Corinne Bailey Rae, Arun Ghosh and Stuart McCallum, it received a good response from the UK underground soul/jazz scene. Their second self-release however really turned heads and got the right people noticing it. That single was  "The Sun", an epic seven minute downtempo deep summer spiritual soul groove that could sit easily alongside the early-mid 70s soul/jazz-funk sounds of Roy Ayers, Gil Scott Heron, Kool & The Gang and Rotary Connection. One person taking notice was UK jazz/soul/global beats don DJ, radio presenter and Brownswood Recordings label owner Gilles Peterson. He asked for more music and after hearing it, he signed the band to his label.

Due to the covid pandemic, everything was delayed by almost a year but in spring 2021, Secret Night Gang started releasing music on Brownswood Recordings. First came a re-issue of "The Sun" in April followed by a new original jazz-funk bomb called "Journey" in May. In July, they dropped their third single for Brownswood, another original tune called "Captured" a real disco-jazz banger. And in August, they finally released their debut vinyl for the label, a 12" single featuring "The Sun" and "Journey". Watch out for more singles and hopefully the debut album coming in late autumn.

In summer 2021, they finally managed to play some live shows including their actual first gig EVER which was the June DJ Lubi/RE:SOUL Sessions show at Brudenell. That show was of course a socially distanced/limited capacity/seated show. Now we can dance. Check the video here of the band playing live and we guarantee even those with two left feet will be cutting a rug on this night to Secret Night Gang infections jazz-funk/soul sounds.

Support band still to be confirmed but before Secret Night Gang hit the stage, Leeds legend of soul/jazz/funk DJ Lubi will be warming up the floor with some deep strictly vinyl cuts.