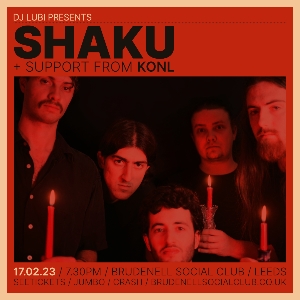 Leeds prog-jazz-rock-psyche-funk legends Shaku are back in 2023 with a new single in January and then a UK tour in February. Their hometown gig is at their spiritual home in Leeds, Brudenell Social Club, and it will be their first appearance at the venue since their seated unplugged show way back in August 2021. The new single is called "Brush Your Own Teeth" and features Leeds alt-pop/soul
singer Alice Kim (with backing vocals from two more great Leeds singers, Lady and Matilde Mirotti). The single is out worldwide on January 2nd with the video for it dropping at the beginning of February as the UK tour begins.
Shaku are well known now on the UK music scene. After forming in 2018 and with two years of relentless gigging across the UK including supporting the likes of Henge, The Headhunters, Too Many Zoos and Têtes De Pois, Shaku finally delivered their much anticipated debut album “Maku” in February 2020. Fusing prog-jazz-rock sounds of the past with prog-jazz-rock sounds of the future, they love the music of Zappa, Gong, Caravan and Parliament/Funkadelic and weave these influences together into their own unique sound they call "Frog Rock". The album was well received with both critics and fans and their live shows have always knocked audiences out.

After the successful album promo UK tour, all their shows in 2020 were cancelled/postponed due to the pandemic. They finally returned to the live stage at Brudenell Social Club in August 2021 for a DJ Lubi seated Jazzland Sessions show where they played a special "unplugged" show - no earplugs required for that one. Only 100 capacity but it sold out within a few days. At the
beginning of 2022, they released a new single, the completely prog-rock sledgehammer slammer "Frog Rock Swamp Bop" with a wicked video where they time-travel back to 1975, both musically and costume wise. With various band musicians being super busy for most of 2022, they only made a couple of live appearances in Leeds that year. Now, with a new single, more new music and a UK tour, they make a welcome return to BrudenellSocial Club. A wild night of "frog rock" is guaranteed.
Support comes from Belfast-born, Leeds based producer/songwriter KONL. Having gained critical acclaim playing across the UK and gaining hundreds of thousands of views for his online videos, he
released his first EP "Think About It" in 2021, mixing vintage funk and soul sounds with contemporary pop sensibilities. The combination of toxically funky rhythms and sweet, humorous songwriting means his music falls somewhere in the valley carved out by artists like John Mayer or Vulfpeck. As a producer, KONL has already developed a distinctive style which has shaped unique musical styles for artists such as Alice Kim and Phoebe Katis, as well as 8-piece funk band New Position.
Like his musical idol Prince, KONL sings, writes, produces and plays all the instruments on his releases. This show will be a solo performance that will showcase all the many musical talents of the artist currently known as KONL. Get down early to check out another Leeds DIY music legend.