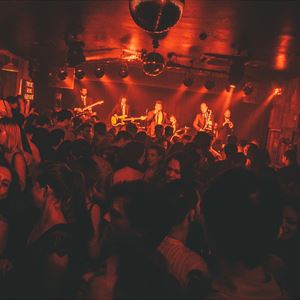 All The Haggis Horns performances

It's been a while but the UK's top funk/jazz-funk band are back! The Haggis Horns launch their 5th LP at Brudenell Social Club on Friday 22nd May as part of an extensive UK promotional tour. Three years since their last album and Leeds show and six years since their last Brudenell show, they're back courtesy of DJ Lubi for another great night of heavy live funk, soul and jazz-funk from one of the best in the land.

Since they first hit the music scene in 1999, The Haggis Horns have established themselves as one of the top funk/jazz-funk bands in the country. Their now legendary horn section has worked with Mark Ronson, Amy Winehouse, Lily Allen, Martha Reeves, Lou Donaldson, Jamiroquai, Corinne Bailey Rae to name a few. In 2007, they released their debut LP "Hot Damn!" with UK hip-hop/soul/jazz/beats label First Word Records followed up in 2010 with their second album for the label “Keep On Moving”. In 2015, they released their third album “What Comes To Mind” on their own new label Haggis Records and in summer 2017, they dropped their first single on the label “Take It Back” featuring guest rapper Doc Brown. The fourth Haggis Horns album "One Of These Days" was released on Haggis Records in autumn 2017. In the last few years, they've been busy gigging across the UK and Europe plus working on side projects. Band members George Powell (keys) and Malcolm Strachan (trumpet) are releasing solo jazz projects on the band's label Haggis Records in 2020. However, when a Haggis Horns new LP is being produced, all band members rush back to jump on the project. A pure labour of love so everyone wants to be part of it. The band only play once a year these days in their home city so if you love funk, do not miss it.