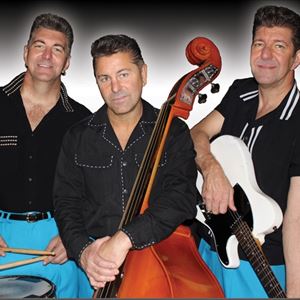 All The Jets performances

The three Cotton brothers. Bob on Double Bass and lead vocals, Ray on Lead guitar and vocals and youngest brother, Tony on Drums and vocals.

This original line up has existed from 1978 right up to the present time, making The Jets one of the longest serving bands on the Rock’n‘Roll scene today.

Over the years The Jets have had 9 National UK chart hit records hits around the world as well as appearing on TV shows all over the world, including The Legendary Top of the Pops. In total The Jets have released 16 cd’s. The Latest Cd 40 Rockin’ Years which was released December 2018

Having played with such greats as Charlie Gracie, Sleepy La Beef, Hayden Thompson, Billy Lee Riley, Billy Fury, Johnny Farino, Jack Scott, The Original Comets, The Crickets, Carl Perkins and Dj Fontana actually played the drums with The Jets.
Both Bob and Ray have had the honour of playing in the Original Comets band.