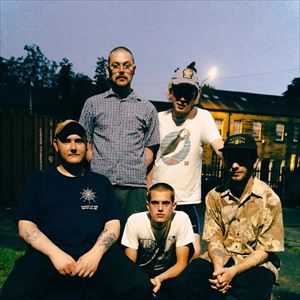 Treeboy & Arc was formed in Leeds back in 2016. At this early stage, the band were playing gigs
on the landings of their parents’ houses, their friends’ house parties and the smaller venue circuit
around the city. In early 2018, the band moved in together in to a small red-brick terraced house
in the heart of LS6. Quickly converting their basement in to a small and damp rehearsal space
made up of some egg box sound-proofing and an old carpet donated by a parent. It was at this
stage the band started writing the music they play today.
Early on, the band took sonic influences from the likes of Pre-Occupations, Protomartyr, Televison
& Ought amongst others. However, their main influences came from their surroundings, Leeds.
From the previous sounds of Leeds such as Gang Of Four or Delta 5, but also from its
architecture, construction, residents and so on. It’s red-brick terraced housing on one side of the
city and bleak grey warehouses on the other, it’s cold and bitter winds and all the friendly faces
and warming people that accompany these scenes. A desire to musically describe life growing up
in the North assisted Treeboy & Arc in creating their tones, their lyrics, their songs and their
general sound and appearance.
Since 2018 the band have shared stages with the likes of Parquet Courts, Shame, Ulrika Spacek &
Rolling Blackouts Coastal Fever to name a few, whilst slowly gaining the love of the locals, selling
out hometown shows on a number of occasions, alongside shows in other cities around the UK.
Throughout 2019, Treeboy & Arc released two singles, ‘Plastic Front’ shortly followed up with
‘Concept’, released on Speedy Wunderground. From then, all focus was planted straight back in
to the recording studio. Treeboy & Arc have been recording various projects on and off since
December ’19 with Chris Mulligan in Meanwood, a small suburb of Leeds close to their home.
‘Life Preserver’ is the first of these projects to be released. A four-track EP written and recorded
throughout the Covid-19 lockdowns in 2020. Ben Morgan on the EP: “It’s a funny one, this EP
probably has both our most commercial sounding song to date, alongside our least commercial
song. We know the songs that make up this EP are varied, but for us this was a chance to
experiment with our sound. I think the lockdowns made us think about why we were writing music
in the first place. For us, it’s always been about writing songs that we wanted to play, so we wrote
four tunes that all of us loved.”

‘Life Preserver’ is due for release on 6th August, released independently by the band.
Track Listing: 1. Role Models 2. Logistical Nightmare 3. In Dreams 4. The Condor

“...It’s the sound of a band simultaneously treading new ground and never having
looked more sure of themselves.” – DIY Magazine

“Anyone familiar with the Leeds music scene will have no doubt heard of Treeboy & Arc. With
their idiosyncratic sound, that fuses catchy yet heavy post-punk with pulsating synths, these
Yorkshire boys have already caught the attention of none other than Kagoule and modern punk
heroes Parquet Courts.” – So Young
“Treeboy & Arc continue to prove themselves to be a leading light out of the north”
– So Young